Most every truss company makes sure every jobsite delivery includes a packet of BSCI (Business Social Compliance Initiative) standards. Usually all truss drawings are included in this packet, with a large orange warning sheet in the cover asking installers to ‘Read the Safety Documents’. Frequently the information is in a big zip-lock bag so it has to be opened in order to get the truss drawings out. It is a way to educate truss installers and to warn them not to become too complacent about their work.

Education from the truss companies isn’t just for builders.  And it’s really not enough. The Hansen Buildings Construction Guide (furnished online to every purchaser) includes an entire chapter titled, “Roof Truss Legalese”. Proper truss handling and bracing, both temporary and permanent are covered, in detail. 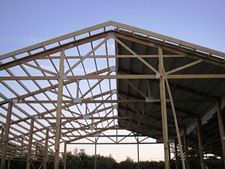 The information provided includes specific information for builders of pole buildings. It can be very dangerous setting trusses, especially very large agricultural trusses and church trusses. These are the most common failures.

There are various reasons for building collapses. For pole buildings, it can be due to large spans and wide spacing of trusses. Most pole buildings are engineered with trusses 10 to 14 foot on center, and in some cases even wider. The average house span is 30 to 32 feet. The average pole barn truss span is 50 or 60 feet, so it’s twice as long. Because they’re so far apart, bracing these trusses (especially during assembly) becomes crucial.

The last couple of winters have brought heavy snowfalls to the Midwest which have caused more agricultural roof collapses. People often want to save money and they ask truss suppliers to build their projects with the minimum amount of loading possible. Many times they will ask for no ceiling load because it’s “just going to be a storage shed”. These requests can lead to trouble down the road. Originally it’s “just going to be a storage shed”, but then later it is turned into a shop with a ceiling and lights, or they will add feed equipment for animals. The trusses were not designed for these loads. Add a heavy snowfall, and disaster strikes.

Professional builders may know the pros and cons of good truss installation, but sadly, do not often follow them. Many pole barns, as well as church buildings, are not always built by experienced builders. Those without experience tend to read and follow all of the instructions, rather than just thinking they know the best way.

Ag buildings are many times built by farmers. Sometimes they’re using a tractor with a bucket to lift the trusses into place. They don’t have the proper lifting equipment. They’ll use a chain to pick trusses up right from the center. There are two things wrong with this: one, they damaged the connector plate in the center of the truss; and two, the truss is not designed to be picked up this way. A huge stress load is placed on the middle of the truss which can start to pull the connector plates or the joints apart.

On the other hand, church buildings are sometimes built by volunteers. Maybe it’s a guy who builds houses or garages for a living, and comes and volunteers to put it up, but they’ve never handled anything this large before. They’re not using the proper equipment.  Using a spreader bar to lift and hold the trusses works to distribute the weight to not just one, but several points.  Long span trusses tend to fold in half because the excessive weight on the outside ends of the truss.  This creates a hinge affect in the center.  Even in a slight wind there’s a lot more danger involved.

Some experienced contractors don’t take common safety precautions into account, such as adequate fall protection. Lots of guys climb around in trusses, basically working unprotected greater than 6 feet off the ground. This happens probably more so in ag buildings, because they tend to be in more rural areas where they’re not so much under the watchful eye of OSHA (Occupational Safety & Health Administration).

With modern agricultural buildings often larger than in the past, and farmers doing fewer DIY projects, there’s little excuse for proper loading and installation requirements to not be followed by today’s builders. They have better access to information than ever before. Sadly, frequently seen, are attempts at bypassing safety for the sake of cost. There is no cost savings large enough, to be worth endangering a human life.

Development of My Post Frame Cabin Plans
Thank you to Hansen Pole Buildings’ Designer Rick ...
Lateral Wind Loads: The Shoebox
Here is an easy home activity, which will give you...
Wind Exposure and Confusion
WIND EXPOSURE AND CONFUSION If you are a register...