As I said yesterday, a properly engineered building is a fully engineered building.  Either it is engineered, or it is not.  I have been appalled to hear what clients feel are reputable companies tell me they sell buildings at a much lesser price if the client does not require sealed plans.  My question to them was pointed. “You design them the same, though, right?”  Their answer was the one which left me with a sick feeling in my gut, “well….” they hesitated, clearly not liking being put on the spot, “they are engineered to be stout.”  Pushing the issue I innocently mimicked, “stout?”  Again their hesitancy said “guilty as charged” all over their answer, “Yes….well…they are built to what our engineers feel are robust.”  Excuse me but….”stout”?  “Robust?”  This is where all I can think of to say to clients is, “Buyer Beware”!

To continue from yesterday…

Many wide width buildings have seriously under-designed interior columns, especially those using columns which are nail-laminated (several 2x plies nailed together). Other major deficiencies include no accounting for additional loads induced by drifting snow and improper truss web bracing. With respect to the latter, roof trusses utilizing continuous lateral restraint  systems to brace longer compressive web members, may be improperly installed and often fail to include diagonal bracing to prevent bracing shifting. This can result in web buckling and subsequent truss failure. 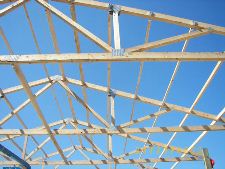 From my view, the more major concern is not improperly installed continuous lateral restraint systems in these buildings, but using them to begin with on the web portion of the truss. In my opinion buildings with trusses over 2 foot on-center should have T- or L-bracing to all long compression webs. Use by builders of continuous lateral restraint systems (rather than L- or T-bracing) results from truss designs produced with software developed for residential buildings. Using L- and/or T-bracing saves lumber and provides greater stability, braces are easier to install (they can be attached on the ground) and do not cause progressive collapses.

Meanwhile the truss on the other side of the failed truss becomes more compromised as its buckled web is pulled further out of alignment. This almost always snaps the web of this truss, resulting in its collapse. The second truss collapse brings down the next truss in a similar fashion. Like dominoes, trusses continue to fail until there are no more trusses to pull down. This entire failure process explains why this failure type is characterized by a partial roof collapse ending at a wall.

It is quite apparent, to me, a vast majority of building purchasers are under the impression they have purchased a properly engineered building, when in fact they have not. In some cases, these clients are intentionally misled which is highly unethical if not criminal.

Frequently trusses are quoted with a “balanced design snow load” which was used as an input to a truss design program by a local lumber yard employee. Given this number, a builder or building owner assumes they are getting a fully engineered building. This could not be further from the truth. Trusses so designed seldom account for all loads to which trusses are subjected, nor do they account for the exact manner in which trusses will be connected to other components, receive loads from other components, and/or be braced by other components. Furthermore, a truss is only one element in an extensive building system and each of these elements must be properly engineered with special attention given to unique interactions between elements.

Back in the day, when I ran my own truss plant besides having a pole building construction business, we quoted trusses without consideration for unbalanced snow load – meaning snow drifting. The Building Codes in use at the time did not address it as an issue and the available computer design programs just didn’t have the capabilities.
So if you as a building designer or truss supplier are trying to “cheap out” when folks don’t know the difference, failure to follow building codes designed to save lives (human and otherwise) is at the least shoddy design work and could be criminally negligent. Wider span trusses in snow country will be more costly, however cutting corners at the risk of property, animals or human lives, is just not worth the risk.