The desired level of soil compaction is best achieved by matching the soil type with its proper compaction method.  Other factors must be considered as well, such as soil compaction specs and job site conditions.  Since granular soils are not cohesive and the particles require a shaking or vibratory action to move them, vibratory plates (forward travel) are the best choice. 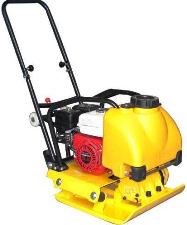 Reversible plates and smooth drum vibratory rollers are appropriate for production work.  Granular soil particles respond to different frequencies (vibrations) depending on particle size.  The smaller the particle, the higher the frequencies and higher compaction forces are required. Two factors are important in determining the type of force a compaction machine produces: frequency and amplitude.  Frequency is the speed at which an eccentric shaft rotates or the machine jumps.  Each compaction frequency machine is designed to operate at an optimum frequency to supply the maximum force.  Frequency is usually given in terms of vibration per minute (vpm). Amplitude (or normal amplitude) is the maximum movement of a vibrating body from its axis in one direction.  Double amplitude is the maximum distance a vibrating body moves in both directions from its axis.  The apparent amplitude varies for each machine under different job site conditions.  The apparent amplitude increases as the material becomes more dense and compacted.

Lift height (depth of the soil layer) is an important factor that effects machine performance and soil compaction cost.  Vibratory equipment compact soil in the same direction: from top to bottom and bottom to top.  As the machine hits the soil, the impact travels to the hard surface below and then returns upward.  This sets all particles in motion and compaction takes place. As the soil becomes compacted, the impact has a shorter distance to travel.  More force returns to the machine, making it lift off the ground higher in its stroke cycle.  If the lift is too deep, the machine will take longer to compact the soil and a layer within the lift will not be compacted.

Soil can also be over-compacted if the compactor makes too many passes (a pass is the machine going across a lift in one direction).  Over-compaction is like constantly hitting concrete with a sledgehammer.  Cracks will eventually appear, reducing density.  This is a waste of man-hours and adds unnecessary wear to the machine.

For granular soils, the best compaction is done with vibratory plates. Vibratory plates are low amplitude and high frequency, designed to compact granular soils.  Gasoline or diesel engines drive one or two eccentric weights at a high speed to develop soil compaction force.  The resulting vibrations cause forward motion.  The engine and handle are vibration-isolated from the vibrating plate.  The heavier the plate, the more compaction force it generates.  Frequency range is usually 2500 vpm to 6000 vpm.  Vibration is the one principal compaction effect.

The bottom line (pun intended) is to start the project off correctly with a site which has been adequately prepared to withstand not only the weight of your new building, but the forces of nature which will be applied to it during your lifetime, and the lifetimes of the owners after you. As important, if you’ve read my previous blogs, is not to alter the soil once you have carefully prepared your site, and then meticulously constructed your dream building.  Altering anything under or around your new building may affect the soil density or water consistency of your “dirt”, and is plain and simple looking for cracks, heaves and other “nasties” which could be costly, if not unsightly.  Don’t end up with a reminder of the Leaning Tower of Pisa….or worse.

And now you know why dirt is so important.