I am Judy Hansen, co-owner of Hansen Buildings, guest blogging for Mike the Pole Barn Guru.  I am happy to introduce Mike’s new caricature, his very own Pole Barn Guru logo!  It was not just one of those spur of the moment type “hey, let’s have a caricature drawn of you” type things. 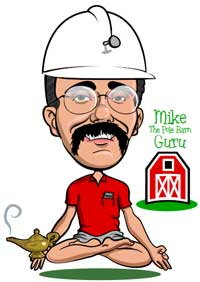 How did we get to this goofy caricature?  It all came from sailing on a cruise ship a few years ago!  Mike and I were attending the yearly Internet Marketer’s Cruise, which sails out of Florida, and hits several of the Caribbean islands along the 8 day trip.  I have long wanted to combine “business and pleasure” so when Mike suggested we try the Internet Market’s Cruise, I was somewhat hesitant.  Yes, it would be fun to do both, but would we get our money’s worth for the business end?  Would we have enough time to really relax, or was it just working on a ship?

I need not have worried. I was amazed from the very beginning, first by the huge number of people attending – something like over 500.  It was well attended and the top notch people there from about every venue of internet marketing were there too – big names!   Conferences weren’t just lectures you fall asleep at.  Secondly, it was amazingly interactive, and we met people who – surprisingly, all had “tag names”.  At first I thought it was a little…well, goofy.   But you remembered them!

“Bob the Teacher”, “Captain Lou” (SpecialEventsAtSea.com) and “Irina the Health Boss” are just a few that come to mind.  But I remember them!  And their names clearly stated who and what they were all about.  It was sort of like branding yourself, but also tells the people you deal with, what your “expertise” is.  Company names do this – such as….yes, Hansen Pole Buildings.  It originally said exactly what we do.  But about 4 years ago we were at a conference and every time I shook someone’s hand and said I was “Judy from Hansen Pole Buildings” I’d get these quizzical looks, with a long drawn out emphasis on the word, pole: “Pole….you mean…like telephone poles?” so we dropped the “pole” and now it’s just “Hansen Buildings.”

But I confess I digress (this is why Mike normally writes this blog!).  It wasn’t long after this great cruise/conference we were enmeshed with the idea of tagging Mike with “Mike the Pole Barn Guru”.  We had already kiddingly called him this  – literally for years.  There just wasn’t a question on pole barns you could ask him, and he’d not have an answer.  Sometimes this meant he’d go research his answer a bit, but never would you get, “gee, I just don’t know.”

Mike is a very educated man on pole buildings, and mostly from years of hands on experience and his nature of being very inquisitive. I can say this after having watched and listened to him for 12 years.  He never drives anywhere a pole building of some sort doesn’t catch his eye, and he has a comment or two about it, “they should have dog eared the overhead doors”, “I can’t believe they left the truss exposed to the weather on that roof only building”, and sometimes I just hear, “man, they sure hosed that building.”

Yes, Mike is critical.  Why?  He cares.  He really does, and he always wants to give folks the best answer he can find for the question he’s asked.  He doesn’t believe in just “winging it”.   If it’s based on his experience alone – this is over 14000 buildings and over 30 years of educating himself, builders, vendors, salesmen, and yes – the thousands of fine folks who purchased a building. They trusted him, the company he worked for, and the price was more than fair for what they were purchasing. What more could you ask for?

So meet Mike, The Pole Barn Guru – all knowing, all seeing, and cares enough to give you top of the line answers …to your dream pole building.

P.S. My thanks to Robert Bauer, President of Goofy Faces (www.GoofyFaces.com) for his patient aritstry in drawing Mike’s caricature.  His timeliness, expertise and professionalism is to be commended.  Thank you!