Having spent a generation in the truss industry, very tall trusses always posed a challenge – both in how to fabricate, as well is in shipping. Granted I once fabricated some 17 foot tall trusses, then couldn’t legally deliver them to the jobsite!

Universal Forest Products https://www.ufpi.com may have solved the problem with the DHP®—Double Hinge Plate system consists of two precisely cut wood members connected by a unique, metal, double-hinge plate. The two wood members are sandwiched around a center block made of LSL (laminated strand lumber) to add extra strength. The center block’s length is trimmed to match the connector plate’s holes and the main members are brought together against the center block. 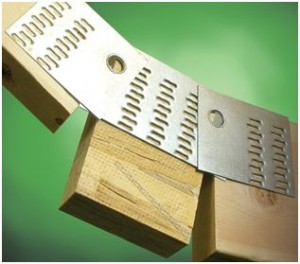 The DHP connector comprises two rectangular, light-gauge, galvanized steel plates. A center plate of similar gauge steel overlaps both outer plates and is hinged to them within this overlap. Punching through the two overlapping plates forms the hinge and creates the truss joint.

Pieces of each plate are pierced from the mother plate on three sides and bent out on the fourth side to form a tooth. Each plate has multiple teeth grouped together, commonly known as a gang nail.

Using a hydraulic press, the gang nails in the outer plates are embedded into both of the main wood members, and the center plate is concurrently embedded into the center wood member. The DHP system is capable of rotating, unlike standard hinges. It’s also structurally capable of transmitting shear, axial, and moment loads between both main members.

Universal’s DHP—Double Hinge Plate can be applied most commonly to what is known as a Cape Cod truss (aka attic truss with a bonus room). DHP is perfect for creating peaks and eaves at the factory instead of the job site. The double hinges can be folded back on themselves, yielding roof trusses which are transportable.

Standard hinges can rotate through on a 110° angle, but DHP can rotate a full 180° and can fold back on itself. The top chord of the roof truss can rotate in the direction of the roof covering, which allows the roof system to lie down flat with its top folded down and its eaves folded in—below the shipping requirements for height and width. When the roof system arrives at the job site, you can simply unfold it and set it up on your structure.

Transportation and setup of your roof trusses have never been simpler. With DHP, more work is done at the factory—and less at the job site!