Lumber: When a Foot is not a Foot

This article was a recent Internet rage: 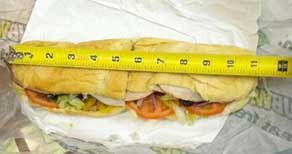 Subway customers are whipping out their measuring tapes after Internet postings that claim a short-shifting of the worldwide chain’s famous footlong sub, putting the Milford, Conn.-based company in the hot seat.

The controversy began Tuesday in Australia, when a very precise customer, identified as Matt Corby of Perth, ordered a footlong sub and then pulled out a tape measure. Corby found the sub measured only 11 inches long and took his outrage to Facebook, where he posted a photo of his sub alongside the tape measure on the company’s page with the caption, “subway pls respond.”

What I loved was the very first response in comments: “Wait till he goes to the lumber yard and measures a 2×4”.

Back in the day when men and boys first began felling trees and using saws to cut the logs into framing lumber, a 2×4 did actually measure more or less two inches by four inches.

Eventually, mankind evolved into high production building and high speed sawmills. High production demanded smooth surfaced lumber to work with, rather than the rough sawn lumber primitive sawmills had been cranking out. About the same time, dried lumber became popular for its dimensional stability and resistance to mold.

The process of drying, then running the formerly rough cut 2×4 through a planer (to create smooth surfaces) created a finished piece of lumber which measured 1-5/8” x 3-5/8”.

In the late 1970’s today’s standard sized 1-1/2” x 3-1/2” dry 2×4 was created. Besides ½ inch being easier to measure than 5/8 inch, we can only assume some brilliant bean counter in a sawmill office determined this would allow for the recovery of one extra 2×4 out of every log!

Some might attempt to attribute the “smaller” dimension of lumber to modern buildings being less able to carry snow, wind and seismic forces. There is no truth to this, as all engineering calculations are based upon the dry dimensions of the material being used.