What to do about Cut Ends of Pressure Treated Lumber?

One of my sons works for an auto parts store. He seriously enjoys his job. However he has some misgivings about portions of it. Raises and promotions are based, in part, upon how much extra stuff (with high profit margins) the staff is able to convince the customer to add to their purchase.

One of the items the management pushes is the sale of “light bulb grease” to anyone who buys a bulb for their car. My first thought was, “you are making this up”, as I had never heard of such a thing. I’ve owned lots of cars, motorcycles and ATVs over the years – my shop even has 30 feet of wall with a work bench, drawers and cabinets to a nine foot ceiling full of just about every imaginable tool and product needed to work on anything. There is no light bulb grease in any of them.

My son’s opinion – light bulb grease is a waste of money and he won’t (in good conscience) push it upon anyone. I have to admire his ethics!

After doing some research, light bulb grease does exist and has a purpose – more commonly known as “dielectric grease”. It helps stop corrosion, reduces arcing and makes it easier to remove and replace burned out bulbs. It also tends to attract dirt. In most cases, enough has been applied at the factory to last the lifetime of the vehicle. 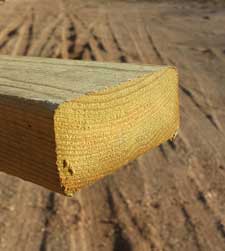 Pressure treated wood has its own version of light bulb grease – a product which DOES have some applications, but in most instances is not necessary. For cut ends of pressure treated lumber, it is recommended to use a brush-on wood preservative, such as copper naphthenate which is available at most home centers (think The Home Depot®), lumber dealers and hardware stores. A popular producer of copper naphthenate solution is Cuprinol. Cuprinol’s No. 10 Green Wood Preserver also apparently is good for keeping squirrels out of attics!

Copper Naphthenate is also available in spray cans under brand names such as Copper-Green®.

For columns in pole buildings, any cut end is going to be way above grade. The only place it might be a good idea to use some copper naphthenate would be into holes drilled through columns for rebar hairpins – to tie the columns into a concrete slab.

On skirt boards (aka splash planks), it certainly would not hurt to use copper naphthenate on any cuts.

So is copper naphthenate required? No, but in some cases it could be a good idea to use some….kind of like light bulb grease