Back in the early 1990’s, when I was building pole buildings, we had constructed a monitor barn for some clients in the Libby, Montana area. 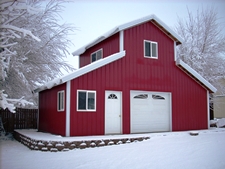 For those who are not familiar with the term “monitor barn” it is a main gabled roof, with side sheds or “wings” on each eave side. The height of the wings is such as the high side of the wing is below the eave height of the gabled roof. Monitor style roofs are very popular in the horse community, as the wings can be utilized for horse stalls, tack and wash rooms, while the raised center affords height to allow for a second floor or loft for either living quarters, hay or other storage.

For applications in snow country, the IBC also requires roofs to be designed for unbalanced loads due to snow drifting. On gabled roofs, drifting can account for snow blowing from one side of a roof, forming a deep berm close to or at the peak of the opposite side of the roof. With monitor barns, drifting can also occur at the upper portion of the wings, against the taller gabled center.

20 plus years ago, things were far simpler, although not nearly as advanced technologically. For the area around Libby, it was generally considered good practice to design for the roof systems to handle a snow load of 40 to 55 psf (pounds per square foot).

Meanwhile, back at the ranch (actually back to our original story), a winter or two after this particular building was constructed – it snowed. A lot. Enough so it gave the appearance of Mother Nature actually making an attempt to use probability to create two exactly identical snowflakes. Eventually the snow got to be so deep on the upper gabled roof of the monitor barn so as to create an avalanche of snow sliding off the roof and impacting the lower wing roofs.

This impact was so great, it actually went through the roof steel – breaking several roof purlins on the way and creating some unique snow sculptures on the floor inside the building. Amazingly, the rafters supporting the wing roof did not fail!

This morning I have been working on the structural design of a monitor barn where the ground snow load is 120 psf. Big snow – glad I do not have to shovel it. The original design concept has the center gable 12 feet wide with an 18 foot eave height. Along each side is a 10 foot wide wing, which slopes from 11’4” to eight foot at the low side. There are some things which can be adjusted in this design, to reduce the investment for the client (as well as reducing the probability for structural failure).

By increasing the height of the wings, the price decreased and the useable space inside the wings increased! How is this? It reduced the height difference between the center gable and the top of the wing roofs – less area for snow to drift against and less of a distance for snow to drop from the upper roof. In this instance the perfect balance came with a wing eave height of 11’6”.

Adding snow breaks onto the upper gable roof also reduced the price. The 12 foot span truss cost was not greatly impacted by the added load from keeping the snow on the upper roof and the “whump” factor of snow sliding off onto the lower wing roofs went away!

With some flexibility in design monitor barns in snow country can be made more affordable and most importantly – safer.