Largely excerpted from an article in “Metal Roofing” on March 13, 2013 by Jim Austin

Metal roofing stands up to the forces of nature as well as or better than any type of roofing material.

When it comes to roofing, Mother Nature doesn’t play favorites when she unleashes hail. 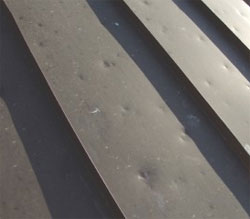 Most areas of the United States are subject to hail, but year in and year out, the most consistently brutal hailstorms hit the south central part of the country — Texas and surrounding states.

According to the RICOWI website, the purpose of these programs is to “investigate the field performances of roofing assemblies after major hurricane and hailstorm events; factually describe roof assembly performance and modes of damage; and formally report the results for sustained hurricane / hail events.”

RICOWI has two hail reports available on its website, one from a 2011 event in Texas and another from a 2004 hailstorm in Oklahoma City.

What follows is the report on metal roofing during those storms.

“Most of the metal inspection sites were in the city of Irving where some of the largest hail fell, with maximum hailstone sizes listed as 1.5 to 4.0 inches in diameter. Nine sites were listed as damage categories 0 or 1, having no visible dents or a small number of shallow depth dents. Some of the stone-coated panels on steep slopes (12:12 pitch) sustained hailstones up to 2.5 inches without visible dents or spalling of the granule surfacing. Otherwise, the sites were listed as damage category 4 as having moderate to severe denting. No fractures or punctures occurred in the metal panels, with no evidence of leakage found or reported below the metal roofing at these sites.

One site with severely dented metal shingles from 2.5-inch hail had some distorted side laps. Raised rib panels had denting of ribs and pans areas, but no open seams were noted. No fracturing or spalling of painted coatings was found at hail impact marks. One of the stone-coated steel panels struck with 2.5-inch hail had spalling of the stone coating at a few locations.

“The inspection teams were able to investigate a number of roofs which had been impacted by a recent significant hailstorm, factually describe roof performance and modes of damage, and correlate the damage with hailstone size(s) and quantities. Data was gathered which can be used in improving evaluation of hail-impacted roofing and improving design of roofing systems to resist hail impact damage.

“In reviewing the overall results, the following findings emerged:

“Hail-caused damage, if it occurred, was readily apparent to the trained eye in most cases. Circumstances where further sampling could be appropriate included low slope roofing material which incorporated laminated plies of materials, such as modified bitumen membranes, built-up roofing, and some thermoplastic membranes.

The effects of hail impact were distinguishable from normal weathering. Impact-caused fractures in materials had appearances distinct from cracking or other indications of long-term weathering. Impact generally resulted in circular starburst-shaped fractures, and the fracture surfaces had limited oxidation, shrinkage, or grime accumulation, and there was often direct surface evidence of the hail impact. Examples included asphaltic materials which appeared dark black-colored with coincident indentation or fracturing, fresh splits in cedar appeared bright orange-colored with associated impact dent, and clean fracture surfaces with multiple fractures on concrete and clay tiles.

The teams observed the threshold for roof damage from hailstone impact to most materials was between 1.25 and 2.0 inches, which correlates with the size ranges used in most standard impact resistance tests used to simulate the effects of hail impact, including UL 2218, FM 4473, and FM 4470 (often used for low-slope roofing products). This field investigation suggests this is an appropriate range as roofing material performance varied with hailstone impacts of this size range. No attempts were made to compare various test methods. An exception to damage occurring by 2.0 inch diameter hail was metal roofing panels which would sustain denting, but retain water-shedding integrity even up to 2.5 inch diameter hail in most cases.

Some materials displayed reduced hail impact resistance, particularly those over 10 years old, with respect to age and deterioration. Categories included asphaltic products (including modified bitumens), and cedar shingles and shakes.

Hail effects on metal roof systems were seen as largely cosmetic, rather than functional. Indentations occurred with larger hailstones, but painted coatings had not been visibly compromised by the denting. Most of the metal roof systems inspected had greater than maximum hailstone size of 2.5 inches in diameter, and no leakage was observed or reported even with the moderate to severe denting. With the extremely large hail there were a few instances of distorted seams or spalled granule surfacing, but even this was rare. Metal roofing products with Class 4 rating performed as designed with no fractures or open seams found with 2.0-inch diameter or smaller hail.

In summary, steel roofing outperformed other roofing products, in resistance to damage from hail.