“Mr. Pole Building Guru.  I installed a 30 x 56 pole building without Tyvek under metal  I now want to insulate With 1.5″ foam  board between purlin then insulate with unfaced fiberglass then install OSB for walls. I don’t want to create two vapor barriers which I think the foam would create one then the OSB.  not quite sure how to insulate for best results any suggestions?”

Provided you are able to completely air seal your foam boards between wall girts, they may act as an effective vapor barrier. Personally I would opt for two inches of closed cell spray foam rather than foam boards. In either case, this means you need to dry your wall to the inside.

Whether or not a material qualifies as a vapor barrier is determined by how much moisture passes through it, and it is given a rating. Any material allowing less than 60NG (nanograms) of moisture to pass through under specific conditions, is considered a type nine residential vapor barrier. A nanogram happens to be fairly small – it is one billionth of a gram!

Including a vapor control measure on your wall insulation’s warm side insulation is essential for preventing moisture movement through walls in winter, and ensuing damage coming with it. In summer however, with a combination of hot, humid days and air-conditioned, dry interiors, vapor drive reverses and can force moist air inwards through your insulation where it can condense on a cold and impermeable vapor barrier.

Ideally we’d have no vapor barrier in summer; but short of this we should at least have one allowing as much drying to interior as possible without sacrificing its winter performance. So the close your vapor barrier is to 60NG, the better. For  context it should be noted polyethylene (Visqueen) is rated at 3.4NG. 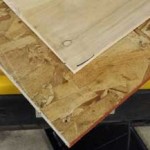 Rated at 44NG (2/3rds of a perm), 7/16 inch OSB sheathing can be a reasonably good vapor barrier, however you may want to consider instead using 3/8″ CDX plywood as it has a 57 NG rating. Do not seal it (paint is a seal) or tape seams and your wall is probably okay.

P.S. You long time readers have probably been wondering how I would incorporate “Nanoo Nanoo” into an article. Well, now you know!