This weekend I’m going to begin construction on my Hansen pole building. Very excited. You guys have been great to work with.

I had originally planned to have one built by one of the bigger named companies, but after seeing what they were quoting, I realized I could do this.

My question is around the use of hand winches to raise trusses or assembled truss / purlin sections. I really like the idea of building a section on the ground, from a safety aspect, then raising and attaching.

I read your blog post on the use of these and also did some digging online. As you stated, the amount of specific information is very limited.

Based on your past experience, have you heard of anyone mounting winches directly to a post using heavy screws / bolts (without any steel) box structure, or is that not a sufficient surface to attach to? I’ve got 30′ spans to lift, so maybe that would be pushing it?

Looking forward to your opinion!

Thank you for reaching out to me and for your kind words. I wish more people would realize they are capable of erecting their own beautiful post frame buildings. They would not only save rfa lot of money, but they would also gain satisfaction from having buildings assembled better than what they would pay most builders to do. 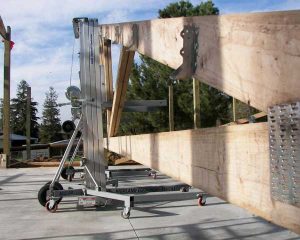 I am all for building sections on terra firma and raising them up with winch boxes. I have done it more than once, with trusses spanning up to 80 feet.  Although probably not involving any new world order conspiracy, you are correct in this being a well-kept secret. While I have not personally tried mounting winches directly to columns without boxes, I know builders who have merely mounted a pulley wheel to column tops and then affixed winches directly to column faces and ground level with duplex nails, so your idea is not far-fetched. Each bay of your building weighs under 2000 pounds total (or less than 500 pounds per column) so it could be as simple as using say four or so of your five inch long Simpson screws for attachment as they will support over 250 pounds each and this would give a high degree of safety.

Now you have my opinion, I will be looking forward to your photos!

Monitor Style, Cost to Build a Floor Plan, and Add...
This Monday the Pole Barn Guru answers questions a...
How to Order Lumber for a New Pole Building
This is Wrong in So Many Ways There is nothing ...
Financing, Vapor Barrier, and Boat Storage
This Friday's daily blog will feature three questi...