“Each year more than 100 people are killed by lightning in the U.S., according to the National Weather Service. Another 300 people are injured in the electrical strikes.

In most cases victims of lightning strikes are outdoors, but some structures do not provide adequate protection from lightning, said Al Pietrycha, NWS Meteorologist.

“Several years ago in my pole barn, only 200 feet from my house, this storm came up and I wanted to watch it, thinking I’m okay, I’m okay,” Pietrycha said. “Lightning struck the barn and I got knocked off my feet in the compression wave, and since then I’ve lost some hearing.”

Pietrycha says he should have listened to his own advice that day to take lightning safety more seriously.

Lightning can strike up to 10 miles from a thunderstorm. Vehicles and enclosed buildings offer the best protection. Pietrycha says people should wait at least 30 minutes after a storm has passed before going back outdoors.”

Here is what Bryan Arlington, PE of Star Building Systems has to say about metal roofs and lightning: 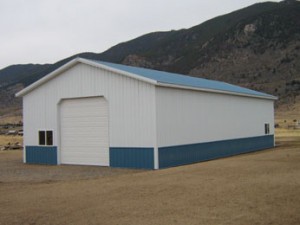 The short answer is, no, a metal roof will not make lightning more likely to strike, but it may make a lightning strike less dangerous if it occurs. That’s right, less dangerous, not more.

The Metal Construction Association, in its Technical Bulletin MCA13a, breaks the issue down into two issues: probability of a lightning strike at any particular location, and the consequences of that strike.

Lightning has been studied for hundreds of years, and there is good general information about how it works, but many of the details of how it forms and where it strikes are still unknown. That lack of knowledge means that its behavior remains unpredictable.

The exact location where lightning discharges appears to be governed by geography and topography, as well as the movements of the storm.  When lightning is ready to discharge, it will, whether there is a metal roof handy or not. It is faulty logic to assume that a metal roof attracts lightning strikes similarly to a lightning rod, because lightning rods are not made to “attract” lightning. Rather, they are made to channel lightning safely to the ground if it happens to strike the location of the building.”

Come back tomorrow for the conclusion on lightning and metal covered pole buildings.

Concrete Slab Calculations
One of our Building Designers asked me the other d...
Rustic Trail Steel Panels
When my first born daughter Annie was alive, her f...
Chasing Your Building Dream
There are lots of folks just like you who are out ...