Well…..I drink. A lot. Of water (LOL – expected something tawdry, right?)!! On a typical day I will guzzle down at least a gallon of it.

Most nights I wake up sometime in the wee hours and know it is time to go guzzle another quart. I actually keep quarts of water in the fridge – which is downstairs. Not wanting to wake my darling bride, I stumble out of bed in the dark. In my stupor, it is pretty much a guarantee I will crash into at least one or more interior walls in the darkness! 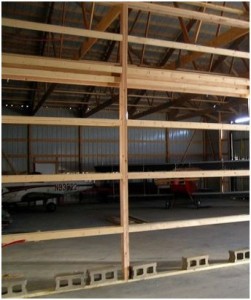 One of the beauties of pole buildings is they can be designed with some rather spectacular clearspans – unlike my 105 year old home, which is built around load bearing interior walls seemingly everywhere. Or at least where I can crash into them in the dark.

A client of mine recently asked about getting a quote on a new building which would be half automotive hobby and the other half storage. He wanted to have a wall placed between the two sections.

I could easily design for him a permanent wall at the mid-point of his building, but would prefer not to for several reasons.

Reason El Numero Uno (inserted for my bride’s benefit as she will be so impressed by my proficient use of Spanish – which is story best told on another day) – interior walls in pole barns are best built as non-structural (not supporting a roof or floor load) after the building shell has been completed and the concrete floor has been poured. In doing this, the materials which have been delivered to construct the wall inevitably have “issues”.

As all of the framing materials are delivered at one time, the ones for the interior walls need to be sorted out, set aside and properly and securely stored until needed. The key words being “properly and secure”.

More often than not, one or the other of these keys are not factored in and the lumber ends up warping, twisting or having other bad things happen which renders the material not fit for use. The other problem is – this material tends to “walk off”. It gets used somewhere else (sometimes a neighbor will even borrow some of it for use on their own projects).  Amazingly, skids of lumber which the customer signed off when delivered at the beginning of the project – are suddenly “not there”.

El Numero Dos (two) is once the building is actually up, the best locations for walls are more often than not in places other than where initially envisioned. In my own building in South Dakota, we moved around nearly every interior wall from where we thought would be ideal during the planning phase.

And, what if the use of the building changes over the course of time? This occurs frequently – in my own case I once bought a building which had originally been a World War II era corner grocery store. When I bought it, the interior had been entirely rearranged for a retail “rock shop”. My version was interior iteration three! And the folks who had the building after me, moved walls around yet again!

By utilizing non-load bearing walls, it allows for them to be removed and moved countless times as future needs change.  In a pole building house, once children are grown, walls can be removed to make a den or “game room”.  Or “styles” change and the wall that once separated the formal dining room from the kitchen can be removed to create an “open” area. In a shop or garage – a wall can be moved to make a larger shop or even a “man cave” complete with couch, TV and refrigerator!

We as humans change our minds – a lot. By designing your next house, shop, garage, horse barn or commercial building – as a clear spanned pole building, it allows the flexibility for “change” – and your future possibilities are endless.