Turn On the Water

I was recently reading a news story online about a fire which destroyed a pole building located in a Midwest industrial park. The large building was owned by a semi-trailer delivery company, and was a total loss of all contents including their offices.

What really caught my attention was a quote from the local assistant fire chief, Mike Payne.

“There were no injuries, but when you’re working in 45 degrees below zero, it doesn’t take long for people to get cold. Everything freezes,” Payne said. 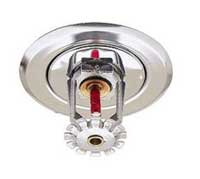 When I hear about a pole building burning down, especially one used for commercial purposes, it makes me wonder why the building did not have automatic fire sprinklers? With an installed cost generally of $1 to $1.50 per square foot, sprinkler systems are a bargain – cheaper than the cost of a nominal four inch thick concrete floor.

Offsetting some or all of the investment costs of the system, are the savings on building insurance premiums.

Automatic fire sprinklers keep fires small, with the majority of fires handled by only one or two sprinklers. Only sprinklers directly above fires are activated, so it isn’t like a small blaze sets off every sprinkler in a building.

Besides insurance cost savings, the Building Codes allow for reduced fire-resistive requirements for structural components, longer exit travel distances (fewer doors required) and larger building areas and heights. In the end, the structural cost savings could be far greater than the investment into the sprinkler system.

Remember the quote about the cold? Although special types of sprinkler systems are available for use in areas subject to freezing, most sprinkler systems are wet pipe systems, meaning the piping is normally filled with water.  If a system or even a small portion of a system is exposed to freezing temperatures, water in the piping can turn to ice, expanding in volume and producing thousands of pounds of pressure.  Such pressures can break fittings, but can also force open the valve caps of sprinklers, resulting in apparent accidental discharge or leakage when the system subsequently thaws.

As most pole buildings are not always kept heated, if considering an automatic sprinkler system – be certain to let the provider know if the building might be below freezing. This includes cooler winter climate areas, which could be subject to power outages.