When I was constructing pole buildings in the 1990’s we contracted to put up a T hangar at Felts Field in the Spokane Valley of Washington. 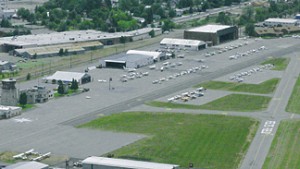 When I was a boy, my Dad was co-owner of a Cessna 182 Skylane, which he kept hangared at Felts. The history of Felts Field dates back far before my days, however.

In 1920 the then Parkwater airstrip was designated a municipal flying field (the site had been used for takeoffs and landings as early as 1913). Although designated a public airstrip, the area was not entirely cleared of stones and the early 20’s found Spokane County’s both chronically drunk and also the prisoners getting “exercise” by removing stones from the airfield!

In September 1927 the airfield was renamed Felts Field and September 12 of the same year saw the landing of Charles Lindbergh and the Spirit of St. Louis.

Prior to the opening of Geiger Field (Spokane International Airport), during World War II, all airmail and commercial airlines flew in and out of Felts Field. Today approximately 170 private aircraft are housed at Felts, with about 200 landings and takeoffs on an average day.

The T hangar we built is the home to six aircraft in a 32’ x 156’ building. Designed with three 36’ door openings on each side, the building used cantilevered trusses (supported on one end, and at the center) to provide clear-spanned sidewall openings.

Each opening has three 12 foot wide sliding doors, on double tracks. This necessitates having to slide multiple doors in order to get one’s plane out of the hangar. In some cases, one of the doors on an adjacent space would also need to be slid to allow full access to the offending plane. While this did not look to be the optimal situation to me, the owners were dead set upon this as being the design solution, and would hear of no other suggestions.

Once completed, all went along fine…..until it snowed. In Spokane, it can and will snow, sometimes in profuse amounts. While steel roofs will shed snow more rapidly than other types of roofing materials, a fair quantity will build up before it goes WHOOMP as it hits the ground….in front of the sliding doors.

Now the apparent problem (snow sliding off the roof) wasn’t the problem – Felts Field has great snow removal equipment. The problem came BEFORE the snow slid off the roof, when the roof deflected far enough with the weight of the snow to cause the sliding doors to bind up and not open or close.

In the case, the building had height limitations, so the 10 foot tall doors and 11 foot eave height were as tall as we could go. In looking back (if height would not have been a restriction) placing a structural header, such as an LVL (laminated veneer lumber) across the opening to support the weight of the sliding door and the end of the roof trusses with a snow load would have been a great design solution.

Come back tomorrow for more on airplane T hangars.  Obviously I’m having fun with this topic!

Room in a Barndominium
Room In A Barndominium I read plenty of chatter...
Carports
I’m finishing up the last of my five week trip to ...
Woodworking Shops Part II
If you didn’t read yesterday’s blog, Part I of a t...