More and more we have clients asking for their new pole buildings to be designed with bonus space above which can be later turned into a finished “bonus room” (my home office is in exactly one of these spaces). Done right, this bonus room can be a cozy addition; done wrong, it can be chronically uncomfortable, either too hot or too cold. 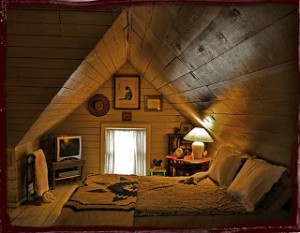 The sad truth is there are more comfort complaints about these spaces than nearly any other rooms. The most common solution is to double space conditioning. However, 500-square-foot bonus rooms with their own 1.5-ton HVAC systems, does seem a bit over the top.

This solution is not just overkill; it shows the cause of the problem wasn’t understood. A few simple framing and insulation details a lot of builders never use can make the dedicated system unnecessary. By propping up the insulation’s effectiveness, it might add $500 to $1,000 to the cost of the room but can save thousands of dollars in mechanical as well as long term heating and cooling expenses.

Basically, more attention needs to be spent on the room’s knee walls.

The most important point to understand is insulation will perform the way it’s supposed to only when totally encapsulated—this is, covered on all six sides (top, bottom, in, out and both vertical edges), as in a standard exterior wall, and touching all of these six surfaces.

The problem with air circulation is insulation works like a blanket: in order to provide warmth, it has to be in contact with the surface it’s insulating. When insulation pulls away from the drywall, air in the resulting gap will be about the same temperature as air in the attic. (Drywall has virtually no practical insulation value.)

The backing can be a panel product like ¼-inch plywood or drywall or a cardboard-like material made just for this purpose. Besides holding the insulation in place, the backing material raises the wall’s tolerance for an imperfect insulation job by acting as another block to airflow.

Backing is not something most people expect to have done in the attic, but it can really earn its keep. In fact, the Energy Star program considers backing so important building owners who want their buildings certified have to put a backing on all insulated knee walls, ensuring the insulation is enclosed on all sides.

While the most important details in a bonus room concern the knee wall, it’s also a good idea to add blocking to the floor system if the bonus room is above a garage or other unheated space. Often, insulation is installed in contact with the drywall on the garage ceiling, leaving a 2-inch gap between floor and insulation.

Blocking adds some tolerance by stopping the airflow through the gap. The blocking should be installed at the very edge of the bonus room subfloor, directly beneath the knee wall.

An alternative to backing and blocking is to insulate between the roof purlins and make the roof system airtight, bringing the attic space behind the knee wall into the conditioned space.

Which approach makes the most sense depends upon local material and heating/cooling costs as well as the skill of the insulation installers.

Regardless of where the insulation is installed, it’s not a good idea to inset staple the tabs on batt insulation to the sides of the framing. Some insulators do this so the drywallers can find the studs more easily, but the result is a 1.5-inch space between the insulation and the drywall, resulting in all the thermal problems mentioned above.

The best practice is to staple batts to the face of the studs, so the batts touch the back of the drywall. While some drywallers may not like it, the space will ultimately be more comfortable.