Particulate (micronized or dispersed) copper preservative technology has recently been introduced in the USA and Europe. In these systems, the copper is ground to micro sized particles and suspended in water rather than being dissolved in a chemical reaction as is the case with other copper products such as ACQ and Copper Azole. There are currently two particulate copper systems in production. One system uses a quat biocide system (known as MCQ) and is a take-off of ACQ. The other uses an azole biocide (known as MCA or μCA-C) and is a take-off of Copper Azole. 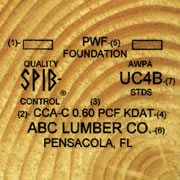 Proponents of the micronized copper systems claim the systems are subject to third party inspection under a quality monitor program. However, the monitoring program is not subject to oversight by the American Lumber Standards Committee (ALSC) as is required for the AWPA standard systems.

Two particulate copper systems, one marketed by Osmose as MicroPro and the other as Wolmanized using μCA-C formulation, have achieved Environmentally Preferable Product (EPP) certification. The EPP certification was issued by Scientific Certifications Systems (SCS), and is based on a comparative life-cycle impact assessments with an industry standard.

The copper particle size used in the “micronized” copper products ranges from 1 to 700 nm with an average under 300 nm. Larger particles (such as actual micron-scale particles) of copper do not adequately penetrate the wood cell walls. These micronized preservatives use nano particles of copper oxide, for which there are alleged safety concerns.

A competitor of Osmose, Viance, has waged what Osmose terms as a “negative public relations campaign questioning the effect”.

The chemical retention level of Micronized Copper is 0.23 lb/ft3 in order to meet the IBC (International Building Code) requirement of a UC-4B for structural in ground use in post frame buildings.

East of the Rocky Mountains, MCA has become the pressure treatment of choice for one of the large “box stores” as it requires no special fasteners (unlike ACQ treatments). ACQ treatments have been found to more quickly erode fasteners in contact with the treated lumber than the former CCA, and now….MCA.

Based upon the evidence at hand…although there is not a ten year or more history of MCA use, Osmose has obtained approval by the Building Codes for their product, and I’d not think one of the largest Big Box stores in America would endorse it’s use without close scrutiny.  At this point, I would have no reservations using MCA treated lumber in any building of my own.