Twenty years ago, I was partners in a post frame building construction business with the late Rod Sevy. Rod was generally a no nonsense guy when it came to clients who didn’t play straight.

One of our building crews had just completed a pole building garage/shop in Northern Idaho. After reviewing the completed building with the client to make certain he was satisfied with all of the workmanship, the crew asked the customer for the final pole building payment, which was then due by contract.

The building owner refused to pay! When asked if there was any problem with the building, the client reported he was pleased with his new pole building, he just didn’t intend to pay. The crew called Rod in our office and Rod was onsite within 40 minutes (apparently ignoring some or all speed limits). 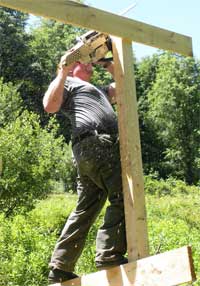 Rod politely asked the customer for the check, and was refused. Calmly Rod walked to his truck, got out a chain saw, fired it up and walked towards the new building. The client ran after Rod asking what he was doing. Rod told him he was taking his building back with him, because he wasn’t about to give anyone a building they had not paid for.

Customer quickly decided Rod was absolutely serious and decided it was prudent to write the check. Rod drove the check to the bank, and cashed it. End of story.

Over the years I couldn’t begin to count the number of former subcontractors of mine, who went out on their own, only to be put out of business when a customer decided not to remit their pole building payment for perfectly good work. The builders did not have the financial wherewithal to survive the instant crush to their cash flow.

For builders who can play the waiting game, numerous legal resources exist which will eventually result in getting paid – but it does take time and patience.

Maybe Rod’s way had its merits.