A Hansen Pole Buildings client in California has just today approved the plans for his new post frame building and poses the question:

“We are in a no frost area with no snow load, so why are the concrete piers so

“The column embedment (depth and diameter of the holes) has to resist several forces, including: 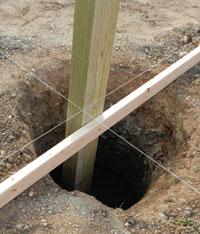 Resisting uplift – the columns, their encasement (the concrete attached to the base of the column) and the “cone” of soil above the concrete bottom collar, must have sufficient mass to keep the building from being literally “sucked” out of the ground.

Resisting overturning – prior to the engineering studies done over the past few decades, the “rule of thumb” was 1/3 of the column should be below grade. Modern research and technology has allowed this design to be far more scientific.

Keep the building from settling – while you state your building has no snow load, the information on your order has your building designed for a ground snow load (Pg) of 35 pounds per square foot. The concrete piers must be able to support the dead weight of the structure PLUS any live loads which would be applied to it. These live loads include the weight of any snow, or potential snow. Your building also is designed for a light storage load attic space. Any roof truss design with this type of load must be designed to support a 10 psf (pounds per square foot) dead load across the entire truss bottom chord (12,960 total pounds on your 36′ x 36′ building) by Code. The storage area adds another 20 psf for another 8640 pounds. All of these weights have to be distributed by the concrete encasement, to the soils beneath the building, with minimal settlement.”

In areas where frost is a consideration, the column encasement (footings) must also extend in depth below the frost line, in order to alleviate frost heaving.

Continuing with my response:

“Your building has been designed with a 2000 psf soil bearing capacity, which is higher than what is allowed by most California jurisdictions. The use of this number, has actually allowed for the concrete diameters of most of the holes to be far smaller than if a lower number had to be used.”

An engineered post frame building might appear to be “just another pole barn”.  They are, in reality, highly complex structures. All of the components of the building, down to the last screw or nail, are placed through an extensive series of calculations.  They must ensure adequacy against the myriad of conditions which a building must resist in order to be Code conforming. And, most importantly, to perform admirably for not only the original building owner, but also for future generations who will utilize the building.  The concrete piers are as important as the rest of the structure they support…to be designed “just right”.