They actually no longer exist.

TICO was the name of a company which manufactured 10 penny, also known as 10d common nails (0.148 inch diameter) which were 1-1/2 inches in length. The company is now defunct, but the name has stuck.

These nails are also referred to as “joist hanger nails”, as their original design was for use in joist hangers. This terminology is not necessarily correct, as many joist hanger applications require the use of nails longer in length than 1-1/2”.

The major manufacturers of joist hangers in the United States (Simpson and USP) both provide detailed instructions online, which specify the minimum sizes of fasteners which will be adequate to carry the maximum design loads of any specific hanger.

Do NOT use these nails!

Some fasteners NOT to use include deck screws.  Besides the issue of diameter, they are also made from steel alloy which is fairly brittle – as such, they can snap when loaded in shear. Nails with diameters of less than 0.148 of an inch (such as 6d, 8d or roofing nails) should also not be used.

The 10d common nail diameter (0.148”) is going to be fairly typical as a specification of the hanger manufacturer. As to length, judge the nail length needed, by the thickness of the member the nail is being driven into.

As an example, a fairly common part for attaching a dimensional lumber floor joist or roof purlin (2×4, 2×6, 2×8, etc.) to a beam or prefabricated wood truss would be a member of the “LU” series (LU24, LU26, LU28, etc.). When nailing through the holes in the hanger into the carried joist, normally a maximum 1-1/2” long nail can be used.  With longer nails, the nail tip would come out the opposite side of the lumber. This is not necessarily a “ bad” thing, but the tip hanging out there is not doing anything, and becomes a potential danger for hooking important things on it, like fingers! 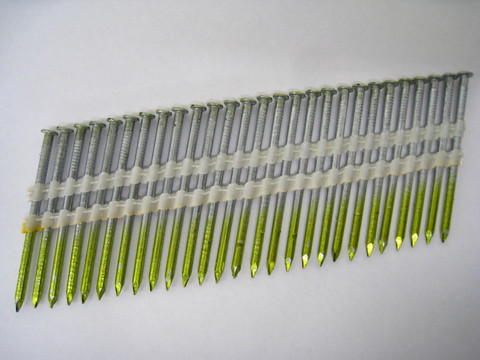 When nailing through the hanger holes into the carrying member, if the member is a single 2x in width, then 1-1/2” long nails will be the limitation. In the event the member is a double 2x, or a thicker beam, then it may well be appropriate, as well as prudent, to go to 10d common nails (0.148 x 3” long).

Fiberglass insulation in pole buildings
The best time to insulate your new pole building…i...
Pole Barn Decks
A Decked Out Lesson I keep telling people after...
Varge Trim on 4 & 8 Buildings
Thin Hair and a Flat Forehead In my most recent p...