Lumber prices are expected to soar in 2013 before hitting all-time highs the following year, according to a report by the Vancouver consulting group International Wood Markets. 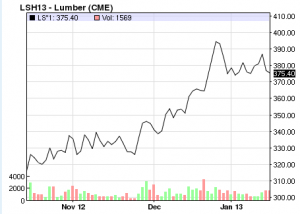 Wood Markets president Russ Taylor said the dynamics have been in place since 2008 for a so-called “supercycle” which will push lumber prices into the stratosphere. The only missing element, he said, has been a recovery in U.S. housing starts.

“We are already seeing some of this happening already. We are seeing the highest prices in six years right now – the middle of December, which is usually when you see the lowest prices of the year. The supply chain is very tight.”

The Wood Markets report covers the years 2013 to 2017, a period during which U.S. housing starts are expected to double. At the same time, North American timber supplies are expected to be constrained by issues like the mountain pine beetle in British Columbia and harvesting cutbacks in Quebec, leading to a supply-side crunch. Further, the distribution chain in the U.S. has been reduced by half because of the recent recession. Many of the companies which survived are on credit watch, Taylor said, and are unable to buy enough lumber to rebuild their inventories.

Those North American factors are playing out in a global wood products market where China is taking a stronger role. China now accounts for 25 to 30 per cent of lumber shipments from the British Columbia Interior, a market which didn’t exist the last time the U.S. housing market was strong.

Lumber prices have already jumped significantly in 2012. The composite lumber price – the price used to set the rate for the softwood export tax – is now hovering around $360 a thousand board feet, up $100 from the beginning of the year. Taylor expects a 10% increase in 2013, and a further 10% jump in 2014, which would mean a record $440 per thousand board feet of lumber.

Further, the U.S. softwood tax on Canadian lumber drops to zero above $355, which means, beginning in January, British Columbia companies will be paying no tax, an added bonus.

What does this mean to the average consumer who is looking to build a new pole building? With the cost of lumber being roughly one-half of the cost of the entire building, a 10% annual increase in lumber costs, could well impact the bottom line by five percent.  If you are considering building “now” or within the next 5 years, the best answer is:  ASAP!

Pole Buildings: Buyers
At Hansen Pole Buildings we get hundreds of inquir...
Materials for Girts, a Raised Floor, Truss Loads
This week the Pole Barn Guru answers reader questi...
Is There Really a Lumber Shortage?
Do we grow enough wood to build a significant numb...