Home >> Constructing a Pole Building >> Camels Have Humps: Fascias Should Not

Camels Have Humps: Fascias Should Not

We are on day 4 of working on a garage for my oldest step-son’s father-in-law in Happy Valley Tennessee.  You might want to skip back to Monday of this week, and skim through to catch on my day by day account of building a garage. – Last I left you, we encountered a problem of a “bump” in the fascia…which needed to be fixed before moving on. After running all kinds of stringlines and checking all of our measurements, we found the problem with the camel’s hump…er, fascia. 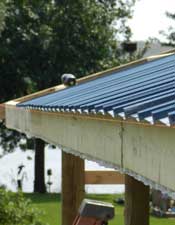 The truss notch on the left side of the building, where we set the first truss, was 1-1/2” higher than it should have been! The fix to the fascia was easier than one might imagine. The eave purlins were removed at this point, and the 5” ledgerlocks which held the trusses to the column were removed. Using his trusty Sawsall, step-son Jake cut the notch 1-1/2” lower, the truss was dropped into place and the fascia straightened itself right out.  Whew!  Major crises averted.

Aren’t pole buildings wonderfully forgiving? All of this fix was handled in less than the time it took for the dew to evaporate so more roofing could be installed. The right side was completed and it was on to the left.

The left side was not quite as perfect as the right side – it was off by 1/8” in diagonal, which was quickly fixed by just leaning a 2×6 against a corner column!  Once corrected and roof steel screwed into place, we had a roof with absolutely perfect dimensions.

No other challenges came up on the roof (other than unbearable heat).

Now it was time to run soffit. The right sidewall had a slight issue. Remember the truss we placed by hand? Not only was the left side too high (fixed above), but on the right side, where the end of the truss bottom chord should have been even with the outside edge of the column – it wasn’t!

The top of this one post was out by ¾” of an inch. The solution was easy.  We removed the 2×4 soffit support “L”, cut into it by the ¾” and reinstall. Soffit was now straight and the top of the wall would be straight. The ¾” across the wall from top to bottom would be impossible to see in the siding.

Granted, some of the “issues” we encountered should not have happened.  But even for the most experienced of crews, when you have many hands working on a project, sometimes “stuff happens”.  This is just a good illustration of how “forgiving” pole buildings can be.

A Pole Barn Fit for the Olympics
Photo by Jeff Gritchen, Orange County Register...
On the Road with Post Frame Buildings
On The Road Author’s Note: This is part 2 of a se...
Day Three at Steve's: Squaring a Roof
This week I am relating a recent day by day accoun...