Several months ago one of our clients posed an interesting question to us.

Her building site was to be in a small township in Michigan. When she contacted her Building Department, in regards to building, she was told all buildings required a concrete wall around the perimeter.

She was concerned about the cost involved in having to pour a concrete wall, as well as having to perhaps place her new pole building on top of this wall. After consultation with our engineers, we assured her there was no structural reason for a post frame building to have to be constructed upon a foundation wall. The engineer sealed plans would reflect the pressure preservative columns being embedded into the ground, as well as no concrete foundation wall needed structurally.

Now comes the unusual twist, as well as where I got my lesson for the day. 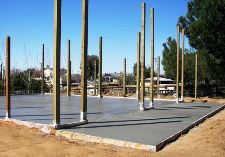 It turns out her township had enacted a “varmint ordinance” about a dozen years ago. The ordinance requires all buildings to have a four inch wide by two foot deep concrete “rat wall” around the perimeter, with the idea being to prevent rats from burrowing under concrete floors. In reality, the purpose of a rat wall is to prevent burrowing vermin from entering a house, basement or crawlspace under the footers of the foundation. In the case of a building with a concrete slab, burrowing “critters” could not possibly enter the structure.

I had never heard of such a thing, so I started doing my research. My first resource was the International Building Codes. Nowhere in the Code could I find any reference or need for such a rat wall. When questioned, the township Building Official confirmed the requirement is not a part of the Building Code, and had been enacted specifically by their township.

It appears this to be an idea which seems to be limited, for the most part, to Michigan.

Now a rat wall is not a foundation, but simply a non-decaying barrier. Some sources feel there is no need to go to the expense of pouring concrete to meet the requirements of a rat wall. Designing the building with a concrete trench footing, between the embedded columns, meets the requirements, however is just a lot more costly to do it this way. Where a so-called rat wall is required, often any kind of material which will not decay over time can be used. Alternatives may be anything from old sheets of rigid plastic to pressure treated lumber.

My advice, in the event your Building Department has such an ordinance, have a discussion with the Building Official as to the purpose of the rule. If it is indeed to prevent varmints from entering the building and it will have a full concrete slab floor, then the point could be argued as to the slab itself satisfying the requirement. Should the idea be to eliminate burrow under the slab as well, then ask what will be accepted as a material for a rat wall. If told it MUST be concrete, argue the point, as he’s costing you needless money!

14 thoughts on “Pole Barn Protection with a Rat Wall”