A reflective radiant barrier inhibits heat transfer by thermal radiation. It does not necessarily protect against heat transfer by conduction or convection.  Why do you need to know about reflective radiant barriers?  It could mean thousands of dollars saved over the years for heating/cooling, in what you choose for not only roofing materials, but more importantly, what is placed between the roofing and building framing.  Bear with me here.

For those of us who never studied thermodynamics (most of us), Kirchoff did it for us over 150 years ago. While he appears to have been a pretty smart guy, most of his work will go over the heads of us average folks. The important thing to remember is – a good absorber is a good emitter (if something gains heat readily it also gives it off readily) and a good reflector is a poor absorber. 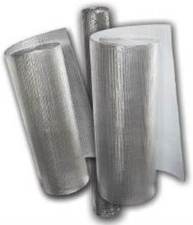 Reflective radiant barrier materials must have low emissivity (usually 0.1 or less) at the wavelengths at which they are expected to function. For typical building materials, the wavelengths are in the mid- and long- infrared spectrum.

To perform properly, reflective radiant barriers need to face open space (like air or a vacuum) through which there would otherwise be radiation.

Moving forward in time from Kirchoff….

In the 1920’s patents were filed on reflective surfaces being used as building insulation. Recent improvements in technology had then allowed low emissivity aluminum foil to be commercially viable. Over the next 30 years, millions of square feet of reflective radiant barriers were installed in the US alone. Notable examples include projects at MIT, Princeton, and homes such as Frank Sinatra’s house.

So how does this work in a building?

Radiant solar energy strikes the roof, heating the roofing system (often shingles, felt paper and roof sheathing or steel) by conduction, and causing the underside of the sheathing and the roof framing to radiate heat downward through the attic toward the attic floor (or inside of the building shell when no enclosed attic space exists). When a reflective radiant barrier is placed between the roofing material and the building interior, much of the heat radiated from the hot roof is reflected back toward the roof and the low emissivity of the underside of the reflective radiant barrier means very little radiant heat is emitted downwards. This makes the top surface of the insulation cooler than it would have been without a reflective radiant barrier and thus reduces the amount of heat which moves into the building.

For those of you sitting on the edge of your chairs, wondering where all this is going, I’m afraid you’ll have to wait one more day.  Come back tomorrow and I’ll explain how Mike the Pole Barn Guru’s science lesson on reflective radiant barriers will help you to design the “perfect” roof for your new building.

One thought on “Thermodynamics and Reflective Radiant Barriers Part I”