Home >> Pole Barn Planning >> Building with Wood: Do It Now

Building with Wood: Do It Now

Brookfield Timberlands of Vancouver, B.C., Canada owns over 3800 square miles of forest land in Canada (larger than the land area of Rhode Island and Connecticut combined). They are one of North America’s largest log exporters.

One of Brookfield’s partners feels a timber supply “shock” is fast approaching which will lead to significantly higher prices for logs and lumber as early as 2014. Going forward, whoever has the ability to pay, will have the luxury of building with wood.

It’s a matter of capturing the highest price for the log. A number of factors, from the mountain pine beetle which has killed 15 to 20 per cent of the timber supply for construction lumber, to growing demand from China and new markets like India, will lead to what some analysts are referring to as a “super-cycle” for forest products.

With current U.S. housing demand being slow, overall North American lumber demand low, and salvage activity high there has not yet been a price impact. As the U.S. housing market recovers and as Chinese, and likely Indian, lumber demand and log export demand increases, it will result in meaningfully higher prices for both lumber and timber. 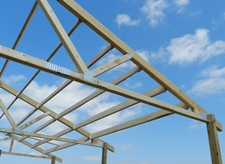 The International Wood Markets Group recently released a report predicting slowly rising prices for softwood lumber in 2012 that will gain momentum in 2013 and surge in 2014.

The U.S. housing slump is expected to linger through 2012, with new home construction beginning to pick up in 2013, Wood Markets reports. Barring domestic or global roadblocks which could derail the economy, Wood Markets then sees a demand surge “that should take prices through the roof by 2015.”

Chris McIver, vice-president of lumber sales and corporate development at B.C. forest giant West Fraser Timber, agreed there is reason to be confident about the future.

When the U.S. market returns, American builders will likely not be able to rely on Canadian wood to the degree they were in the past. McIver said West Fraser learned from the collapse of the U.S. housing market it is not a good business model to have 60 per cent of your product going into one market. West Fraser lost 40 per cent of its lumber business when that market collapsed. China proved to be a lifeboat.

“A lot of companies like us are putting 25 per cent to 35 per cent of their Canadian production today into Asia,” McIver said. “When the U.S. market recovers, some of that product will likely flow back to the U.S., but we as a company are committed — and I think a lot of the other companies are as well — to stay in Asia. The future for lumber in China is bright as development moves inland from the coastal cities.

What does this mean for you? If you are contemplating building with wood: a new garage, house, shop, barn, riding arena or any type of low rise wood framed building in the next 2 to 3 years, NOW is a good time to invest.  Before the market goes up.  The window of opportunity for taking advantage of historically low cost lumber is quickly closing. For those who need buildings, the wood framed pole building is a tremendously affordable investment.