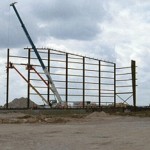 Alex Welstad was working in Florida and Texas, doing disaster recovery following hurricanes Irma and Harvey. He returned to Coeur d’Alene, Idaho in 2017. His Florida building partners had a prior history of erecting pole buildings for years, so it was a natural niche for them. Their first year about 20 buildings were constructed and earlier this year (after another 20 or so buildings) Alex’s building partner decided it was time to move on – leaving Alex as the main man. In my short time of knowing Alex, I have learned to quickly appreciate his thirst for knowledge and willingness to work both hard and smart to have happy clients. You can learn more about Alex and his business here: http://www.builtmammothstrong.com.