When Pole Barns Under Construction Collapse 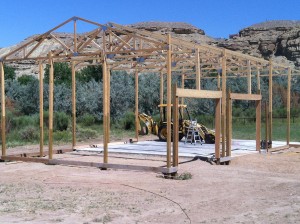 OSSIPEE, NH — “As much as I hate to come to the Commissioners with bad news, the cat’s already out of the bag. We had a problem with the pole barn. It went over on us this weekend. I don’t exactly know what went wrong,” said Carroll County Farm Manager Will DeWitte told Carroll County Commissioners at their Nov. 28 meeting.

He suggested high winds were to blame for the collapse and that perhaps a microburst came through and knocked it over. “We knew the wind was strong out there, but didn’t know it was that strong,” said DeWitte, calling the Nov. 24 pole barn collapse a “small setback for now.” As reported last week, insurance adjusters were set to visit the site but as of press time this week there was no word on their findings.

DeWitte told commissioners on Nov. 28 that the town’s building inspector came out while the building of the 30-foot by 120-foot pole barn, being constructed to store firewood, was in process. “He seemed to think it was very strong…He was shocked it went down,” said DeWitte. The plan, as of Nov. 28, was to clean up the collapse and salvage as many of the building materials as possible before it gets covered in snow and then store the material until next spring when the barn will be rebuilt. DeWitte said the building inspector has been “very helpful” and has given a lot of good suggestions about extra things that can be done to help it stand up to the wind next time. “We’re not out a lot of money, about either side of $15,000 in total,” he said.

Without being able to personally do a forensic review of the collapsed building, I can only surmise as to what caused its ultimate downfall. From experience, a pole building is at its greatest risk when it is completely framed up and before it is sided and roofed.

The siding and roofing (or “skin”) of a post frame building is what provides the rigidity necessary to keep a building standing. Think of the same principles as what keeps a uni-body car on the road, or a jet aircraft in the air.

Back in the late ‘80’s, I was involved in a similar experience.

Just prior to the Thanksgiving Holiday, one of my crews had just finished framing on an 80’ x 204’ riding arena for a client in Molalla, Oregon. When they came in to the office, prior to the holiday weekend, I even made it a point of asking if they had everything all braced up and secure. This was a very experienced crew, so I had no reason to believe they had not done a thorough job.

Over the weekend, 70 mph plus winds hit the area….it turns out one of the building columns had a “timber break” in it, which was not detectible from the outside. Under the high winds, this column snapped – sending the rest of the building to the ground. All we could do, the following Monday morning, was to dig a huge trench at the back end of the building and bulldoze the shattered remains into the ditch.

Moral of the story – once you start framing, move forward quickly to get the “skin” on the building as quickly as possible, to prevent catastrophic collapses.

Engineer - It Ain't Amtrack
I once heard an anecdotal story about a man who ha...
Wane
In the construction of Eric’s new self-storage pol...
Why is My Steel Roof Leaking?
Yesterday, I was contacted by one of our clients w...